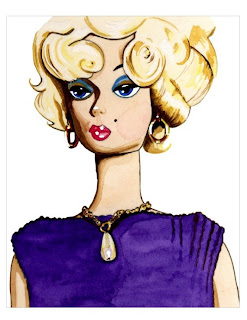 On this day in 1959 the Barbie doll made its debut at the American Toy Fair in New York, the doll was designed by Ruth Handler and introduced by Mattel Toy Company costing $3.

Diet drug retailers and plastic surgeons the world over rejoiced.

I love art dolls or handmade dolls for aesthetic and historical reasons. I especially love voodoo dolls, but will never own one unless it is of the molded chocolate sort that can be eaten and doesn't take itself or its intent seriously.

I never played with dolls when I was a little girl. The only doll I can remember receiving was a Raggedy Ann doll and she was ok, since she doubled as a pillow. I liked to climb trees, run, swim, ride my bike that I bought with money I earned washing cars, hang out with the neighborhood boys. All the neighborhood girls my age wanted to play house wife, or play shop at the mall, or wedding day, with their vast array of Barbies.

I hated Barbie. Hated her.

My favorite game was drama in which you acted out very dramatic stories. They generally involved mystery and a bit of blood. For a very brief time, another girl moved into the neighborhood that loved stories, hiding in forts, swinging from the Bowery rafters, and watching suspicious neighbors in case they were Soviet spies. But then she moved away. Inexplicably, all my boy friends turned shy, wanted to hold hands instead of hide out in tree forts. The neighborhood girls still played with dolls, but now wanted to hold hands with real boys instead of pressing Ken's plastic arm around Barbie's impossibly small waist.

Over nineteen years later when my daughter was a toddler, I can't tell you how surprised I was that she adored Barbie and insisted on owning all of them, on wearing Barbie dresses and princess dresses and molded pink high heels, and insisted that I play Barbie with her, so she wouldn't have to be all the voices.

I played Barbie goes to college, Barbie travels the world, Barbie encounters a terrifying shark in the bathwater and wins, and liked it.
Posted by Danna at 1:50 PM

Email ThisBlogThis!Share to TwitterShare to FacebookShare to Pinterest
Labels: holiday