The Day in Cartoons: Davida and Goliathphant - Bill Day 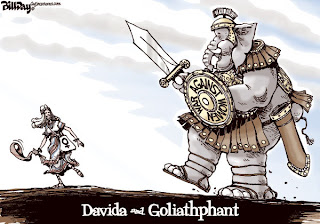 53 percent of the population may appear like a minority, to some.

fyi: I googled "GOP and women", and these were the first articles:

The New Yorker - Has Limbaugh Identified the G.O.P.’s Woman Problem?

Huffington Post - Fighting the GOP War on Women From the States

Fox News - Yes, there is a Republican war on women voters(if Fox News acknowledges the GOP's issue with women, well, it's bigger than we think)

The Daily Beast - Senate Dems and Republicans Square Off Over New Violence Against Women Act
Posted by Danna at 12:56 PM