Artist of the Day: The Last Good Emperor - Jenny Silva 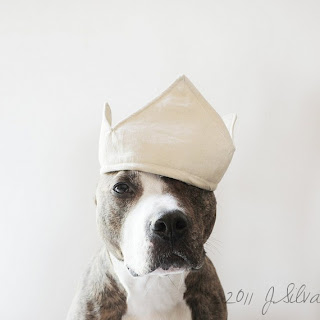 Artist Bio:
My life is all about my two American Pit Bull Terriers and presenting positive images with them here in the north Florida area. I love photography and stenciling
---
This image of a dog crowned as an emperor, got me thinking again about an article I read last night about the Koch brothers, which led me to think of emperors of the past, which led to thinking of the Prieuré de Sion's, (a not so secret secret society since Holy Blood, Holy Grail) failed goal of an emperor-run one world order, which led to thinking about Bush Sr's push for New World Order, which then made me think of Bush Jr. and the belief-defying owl ritual recounted inThem: Adventures with Extremists, which devolved into thinking of dictators, despots and their effect on human lives, which lastly led to thinking of corporations, which now that they are people, (thanks so much Supreme Court), just may be the new emperors on the block. Or are the Koch brothers the heir and the spare? (read the Bloomberg article and you decide).

I start with a great picture of a dog and end with a thoughts on genocide and corporations. Poor puppy!

Based on what we know of past emperors, using good and emperor is an oxymoron on par with benevolent dictator.

The history of emperors and monarchs is fascinating, now that they're really history and can't wreak havoc. The last hurrah of twentieth century emperors and dictators saw atrocities on an incomprehensible scale.

I've listed two relatively unknown genocides below, as well as a list of monarchs and related articles, and the Koch article that started this train down the tracks, in case you're interested in further reading. (You may also be interested in Armenia, but there's a law against calling the systematic deaths of 1.5 million genocide, fyi. (Historical note: When the Nazis were trying to figure out how the could get away with the Final Solution and asked their Fuhrer this, Hitler replied, "who remembers Armenia.")

Wilhelm II and the Herero and Namaqua

What about the 21st Century? Darfur, the first genocide of the century continues. Some quibble over which noun to use, massacre or genocide, when referring to Hafez al-Assad and Bashar al-Assad of Syria.

The Economist - A Survey of the 20th Century: The last emperors

Wikipedia - List of monarchs who lost their thrones in the 20th and 21st centuries
Posted by Danna at 7:25 AM

Email ThisBlogThis!Share to TwitterShare to FacebookShare to Pinterest
Labels: artist of the day