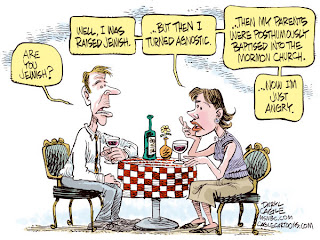 Religion and politics are seriously hot button pushers for the majority of Earth's inhabitants, (so I am going to very carefully put my finger on the button without pressing down too hard).

I live in Utah, so I am smack in the epi-center of all things Mormon. A lot of practices or beliefs people who are not from here and have never heard of or imagined until watching recent news, may seem strange or inexplicable. Yes, I agree, but most practices and beliefs not your own or the dominant culture's are strange and inexplicable, if you really think about it.

Read more about the subject:

Huffington Post - Ask A Mormon: Am I Going to Be Baptized After I'm Dead?