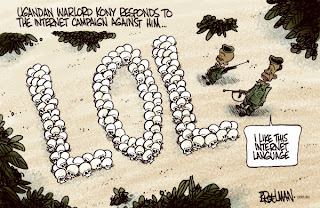 "Here's the biggest problem. Do you wanna know what it is? Nobody knows who he is. He's not famous. He is invisible," said the documentary's maker Jason Russell. "Here is how we are going to make him visible."

Watch the film, Kony 2012. It's only twenty-nine minutes of your time.

Invisible Children uses film, creativity and social action to end the use of child soldiers in Joseph Kony's rebel war and restore LRA-affected communities in central Africa to peace and prosperity.